She's a new mum, freelancer, former editorial coordinator of Empower magazine and sounds darn tasty with a cup of tea (oops, that's Tim Tam). Nevertheless, Lady Tam-Tam aka Tammy Warner-Wilson is here to share her joy of writing with us and we're very glad to have her! Visit her very swish web site and blog at: www.ladytam-tam.com. 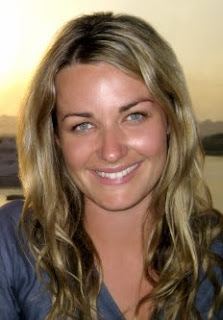 Tammy Warner-Wilson realised she wanted to be a writer aged six. Spurred on by early success, she spent the ensuing years of her education writing anywhere and everywhere before stumbling upon a career in marketing and event management.
Hailing originally from Brisbane, Australia, Tammy has worked for various organisations including News Limited and Virgin Blue. In 2005, aged 21, she boldly decided to relocate to the UK and settled in Soho, the creative hub of London. Never one to rest on her laurels, Tammy developed an incurable wanderlust and travelled to more than 22 countries between professional stints in event management and business development.

Returning to Australia in 2007 with a fierce determination to pursue her long-held writing dream, Tammy soon landed an editorial role at Empower magazine. She has since embarked on a freelance writing career with a specific interest in health and wellbeing and is also finishing a Bachelor of Communications. Tammy lives in Sydney with her husband and eccentric one-eyed pug, Hercules.

1. How did you discover you wanted to be a writer?

I developed an affinity for writing at an early age – I had a vivid imagination as a youngster and spent hours writing fanciful tales about anything and everything. My first major work, Lola’s Red Party Dress (an impressive five-page storybook complete with stick figure illustrations) received rave reviews from my grade-two teacher and was later awarded a prestigious gold star from the principal. Needless to say, that was all the encouragement I needed and English quickly became my favourite subject throughout school. I was also obsessed with journaling and have diaries dating back to when I was just ten-years-old, but it was many years until I reconnected with my childhood love of writing and decided to pursue it as a profession.

2. In which other fields have you worked? How did you transition into becoming a freelancer?

I didn’t follow the conventional path of attending university straight after high school. Instead, I commenced full-time employment in recruitment, sales and customer service. In 2005, aged 21, I relocated to the UK and settled in Soho, London. I stayed for two years, travelling to more than 22 countries between professional stints in event management and business development.

I returned to Australia and landed an editorial role at Empower magazine, a bi-monthly title for women with an interest in personal development. As editorial assistant I worked closely with the editor to help put the magazine together, in addition to writing feature stories and other administrative tasks. Launched by an independent publisher, Empower graced the shelves of news agencies Australia-wide for 12-months before the effects of the global financial crisis turned it into an online mag only. I received a redundancy and decided to study journalism at university while focusing on a freelancing career.

3. What were your first goals as a writer? For which publications did you aim to write?

My goals were pretty simple – to write and get published! When I started freelancing I targeted street press and independent mags, and was soon commissioned to write stories for YEN and Urban Animal.

4. What was your first paid (or breakthrough) article? How did it come about?

My very first article appeared in Empower magazine one month before my 25th birthday. It was a wellbeing feature that detailed my first experiences with kinesiology, a natural therapy rooted in the principals of Chinese medicine. I was incredibly nervous submitting it to my editor, but luckily she was very encouraging and really nurtured my writing skills. Needless to say, it was a proud moment finally seeing my name in print.

5. What is the most enjoyable article you have written?

I’ve written several wellbeing articles where I’ve had to personally experience a natural therapy, including Ayurveda, a holistic medicine hailing from India. The treatment involved an Ayurvedic massage and ‘Shirodhara’ – where oil is poured continuously on the forehead to soothe the body. It was so relaxing I floated out of the clinic afterward. Bliss!

6. How do you juggle writing with other aspects of your life such as motherhood?

I’m still learning! In addition to being a new mum to Evie, my four-month-old daughter, I’m finishing my communications degree. Time management plays a very big part, as does taking care of myself, physically and emotionally, so I feel energised to cope with the many different aspects of my life.

7. How can a beginner writer compose a winning query letter?

Have a killer hook to get the editor’s attention, keep it brief, polite and professional. Be original and ALWAYS make sure your pitch is relevant to the publication.

8. What are your best tips for beginner freelance writers?

Keep confident. It can be so disheartening getting rejections (or no response at all!) from editors, but try to stay focused and believe in your ability - success will come, eventually!