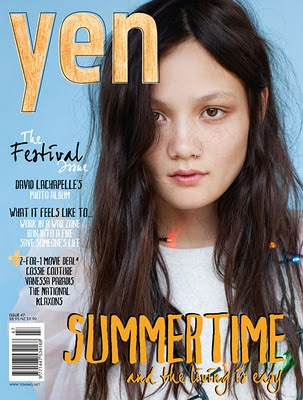 Publication: Yen
How Often Does It Come Out: Six issues per year
Distribution: National
Contributors vs Staff Writers:
More than a snowball's chance in hell of getting published. Good enough!
Target Audience:
Age: 18-30
Gender: Female
Interests: Art and photography, fashion, beauty, music, lifestyle and film.
Topics and Themes:
Ricki Lake, Oprah and Donahue make an appearance in an article on talk shows and being summer, there's a special on music festivals such as the Big Day Out and Future Music. I was excited to see an article by Sarah Ayoub of Wordsmith Lane fame (see my interview with her), which asks ten ordinary Australians "What It's Like To..." run into a fire, win gold, be naked on stage and do other extraordinary things. The magazine is definitely heavily into interviews, chatting with Johnny Depp's squeeze, Vanessa Paradis, as well as illustrators, designers, authors and rockers. There is also a whimsical offering on hula hooping.
Length of Features:
Up to 2,500 words, with 1,000-word features being the staple.
Tone and Style of Writing:
Less quirky, colloquial and personal than frankie, the writing is more reporter-style here, but on similarly offbeat characters and themes. There's also less of a political bent and crafty flavour. Interviews often use the question-and-answer format, while other articles frequently form makeshift lists using subheadings. Breakout boxes are sometimes used. Experts are rarely quoted and titles lean towards the clean and uncomplicated.
About How Many Features:
Fifteen.