TV Appearance on The Morning Show 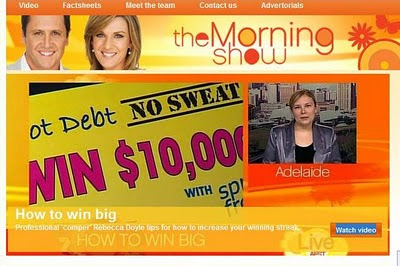 In my last post, I alluded to a mysterious TV appearance. Now the secret's out -- I was on The Morning Show last Wednesday as an "expert" on winning competitions!

It all started with an email from the supervising producer. She'd read my article on Femail.com.au, "How to Win Competitions and Free Stuff" and thought it would be an intriguing segment if I was interviewed on the show. Although I'm a complete newbie when it comes to television appearances, I pictured being able to put "as seen in Money magazine and on The Morning Show" on my book proposal and drooled a little. So I agreed, then wondered what the hell I had done.

Being a stereotypical shy writer type, my biggest fears, right behind spiders and clowns, are public speaking and public ridicule, both of which could feature highly in this TV thing. However, I was somewhat placated by there being a rough script and a couple of phone calls the day before to rehearse what I'd say. I was as ready as I'd ever be.

On the day, I found it fascinating being in a TV studio and hearing the behind-the-scenes chatter of the hosts, Larry Emdur and Kylie Gillies, and the various producers and assistants in my earpiece. As far as my segment was concerned, it went by in a milli-second and then I raced to my friend's house to see myself on TV (there was a 30-minute broadcasting delay). And then ewwwwwwwwwwwwww, seeing yourself on TV is mortifying. You hear every "um" and obsess over every strange face you pull. Not fun, but kind of mesmerising at the same time.

So here it is, in all its mortifying glory: Morning Show TV Appearance