I Met a Published Author... 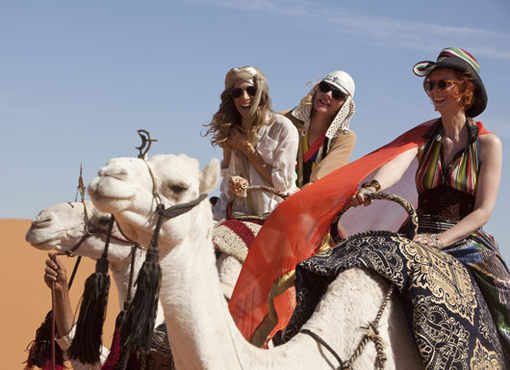 ﻿
I had a chance meeting on the weekend...

Two gal pals and I visited a nearby seaside town. Among the festivities (swimsuit shopping, eating eggplant schnitzels and riding camels in true Sex and the City fashion), we stepped into a local bookshop. There, a man politely introduced himself as an author and asked if he could talk to us briefly about his book.

Now, normally I'm not so much for people giving me unsolicited sales talks, but I was in slightly less standoffish holiday mode, plus I was intrigued by this guy being a fellow writer, so I said yes to hearing the spiel. I'm so glad I did.

His name is Dave Bell; his book, The gardener's guide to Growing Money Trees. While I'm not squarely in his target audience (being neither a keen plant rearer nor very money-minded), he had a fascinating story about how he decided to write his book.

You see, he was on a surfing trip when a powerline narrowly missed slicing through the minivan he was in and decapitating him. Cue life flashing before eyes and re-evaluating what was important in his life and what he really wanted to achieve. In the words of every movie character Keanu Reeves ever played, "Whoaaaaaaaaa...".

He decided to create a book he'd never seen before, one that looks at the big concepts in life and through beautiful photographs of nature and clever captions, gets us to gently chuckle at the nature of our existence. I'm all for books spreading positivity, so I thought it was cool.

What also impressed me about Dave was his willingness to answer the fledgling writer questions I threw at him left, write and centre (ho ho!). They pretty much came out in a stream of "how did you find a publisher - who was the publisher - how did you approach them - did you write a press release - what was your marketing plan - how did you set up your web site...". He even gave me a copy of his marketing email to businesses who might wish to purchase his book as a corporate gift. Very, very cool.

His book has been featured on TV, he's done radio interviews and he also showed us photos on his iPhone of celebrities he'd met and presented with his book at their own book signings, including Jamie Durie and Jane Fonda. He was definitely pro-active about marketing his own book, to the point where he visited local bookstores and introduced himself to strange hell-raising chicks who smelled vaguely like camel. Kudos.

Have you ever had a chance meeting (or near-miss with a powerline) that inspired you?