Lou Pardi is a freelancer, copywriter and the Melbourne-Editor-at-Large of the wonderful Peppermint magazine. You can see more of her way with words at her web site, www.loupardi.com, where she describes herself as follows... 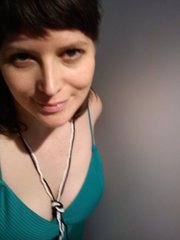 Lou Pardi is the kind of girl who will finish your sentences – but in a helpful, eloquent way, not a know-it-all, boorish way.
She’s got the knack for stating just what you’d like in the way you’d like it. In addition to the knack, she was also once told she had ‘the look’, but that was by a third grader who had been listening to too much Roxette.

Whether you need an artist, actress or emergency retired CEO, interrogated, interviewed, coddled or cuddled, Lou has the right manner to allow them to share just a tad too much.

Lou’s writing has appeared in many places including Beat magazine, triple j magazine, T-world, Peppermint, The Brag, Desktop magazine and on the back of beer coasters in the early hours of the morning.


1.  How did you discover you wanted to be a writer?
I'd always read a lot, but I found in high school that writing was what came easiest to me - there were no 'right' answers and there was room for creativity. Maths and science weren't my friends. I ended up editing the school yearbook and always did a lot of debating. After school I went into working in admin in law firms, where arranging words was also really important. I tried stand up, really only to test how my 'funny' (and I say that optimistically) writing would fly. I realised after a few years that writing was my strength, and my preference, over performing. I came to a point where could easily leave the stage, but I can't imagine not writing. I think that was when I realised that I wanted to be a writer. I decided that if I put as much time into writing as I had stand up, one day, I could be a writer. Fast forward five years of double life and little sleep (day job and freelance writing, editing etc) - done.

2.  In which other fields have you worked? How did you transition into becoming a freelancer?

I worked as an animal attendant in dog pounds (a backyard full of dogs and many tears later, I stopped). I did the usual retail stuff growing up (fashion, food) and I've waitressed (maybe the most challenging job I've ever done). The bulk of my working life has been in admin in law firms, education, zoos, banks and other corporates. I was a 'right hand' executive assistant so did everything from paralegal to marketing, and photocopying in the old days. Lots of photocopying. I overlapped dayjobs and writing for five years - writing for free at the start, then in street press (which I still do some of), then magazines, then editing, then copywriting.

3.  What were your first goals as a writer? For which publications did you aim to write?

My goals I think were to just write. It's the activity of writing which I love. I would write anything. To some extent that still applies. I've been writing for five years, but I think each new project throws new challenges at you, and expands your skills base. I've interviewed people in on arts, food, fashion and environment. I've written plays. I've started books. I've written training manuals, letters and reports. I've written website copy. I guess the long term goal is a book, and because it's so important, I haven't started yet. (Emotional not rational response, but that said, most of my creative writing projects are born when my subconscious is ready, so perhaps not so irrational after all.)

I didn't so much aim to write for certain publications, although that's a motivator nowadays (hello Gourmet Traveller). I was and am motivated by a genuine interest in people and what motivates them and human experience, and building community by communicating shared experiences.

4.  What was your first paid (or breakthrough) article? How did it come about?

So many breakthroughs. One I remember well was interviewing Meow Meow for Beat magazine - my first article where (I feel) I could paint the whole scene - where she was, how she sounded, her state of mind, rather than just quoting words. Recently I've been privileged to interview David Suzuki and Jane Goodall - people who I believe play a part in moulding our community's approach to our environment.

As for how they come about - in a specific sense - Meow Meow and Dr Suzuki came through Beat, and Dr Jane Goodall I pitched to Peppermint and found through some contacts of mine. In a general sense - saying yes to given opportunities and goals, and making it happen.

5.  What is the most enjoyable article you have written?
There's a column on death I wrote a long time ago which was intended as a funny piece. It's about a good friend of mine's mum dying, a few years after mine had. I still send it to people in the same situation. It's about how we experience death in western culture, but it's far less sophisticated than that sounds. I haven't sent it to my friend yet.

6.  How can a beginner writer compose a winning query letter?

Be passionate, persistent and willing to do anything. However, lots of letters get sent and I hate to admit to it, but even I don't read all of the ones sent to me sometimes. My advice would be find another way. In my experience, an introduction is worth far more than the best qualifications, experience or cover letter.

7.  What's your best tip for beginner freelance writers?
Write
In the first instance, write everything you can. Don't underestimate the power of a well-written, entertaining blog on a niche subject - even if you think no-one's listening at first.

Read and analyse
Get to know the publications you want to write for intimately. Think about what goes into each page. The written material, how many words are in it, the image, the design, whether there are break out boxes, captions on pictures, the style of headlines, whether there are pull quotes. You're part of a team and understanding that is important. Nothing worse than a 'dog story' about a chihuahua with a picture of a giant German Shepherd. At the beginning, your editor will handle this, but it's worth considering from go.

Ideas
A huge part of writing is ideas generation, thinking about what the reader of a publication wants to know about, pitching the idea and having it accepted, and publishing it before someone else does. Get in the habit of keeping a notebook (or yes iPhone notes, if you're sure they won't get wiped) of ideas for pitches. If you're not at the stage of pitching yet, do them yourself on your blog.

Network (is not a dirty word)
Once you can do the job, be creative about how you can get your name in front of the people you want to know you. Go to events, participate in social media, expand your network. Be nice to everyone, and listen; someone smarter than me once said that generally, when you're talking you're not learning anything - worth noting.