"Summer and the City" 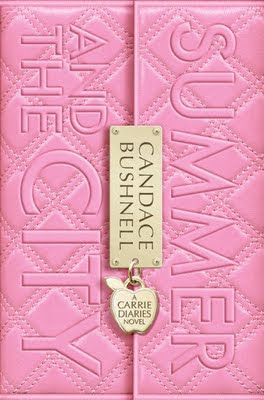 I wasn't so impressed with Candace Bushnell's first prequel book to the Sex and the City series, The Carrie Diaries (see my review here -- I've since revised the rating from 8/10 to 7/10). So does the continuation of Carrie's story about her first arriving in New York City fare any better? Let's see...

I'm going to try to review Summer and the City with as few spoilers as possible. Suffice it to say that throughout the book Carrie begins hanging out with a couple of her best friends from the TV series and meets one of the men featured in the very first episode (now your brain is ticking over wondering who it is!).

Reading this novel very much helped to reconcile the previous book with the TV series version of Carrie. She makes a brief trip back to Castlebury and a few of the hometown characters from The Carrie Diaries stumble onto the pages of Summer and the City, but mostly to explain why they're never mentioned in the TV series. They're brought up to be dismissed.

Carrie deals with the issues of reinventing herself in New York City. The other characters, with their varying personalities, represent the different choices of who Carrie could become. Should she assume a fake identity, like one of her friends who's lying to her fiance? Will she crumble under the pressure of New York and have to crawl back home in disgrace? Has she changed in the big (Big, ho ho!) city? Is she a snob for no longer respecting her previous small-town existence?

These questions were answered in a believable and well-written way. I also enjoyed the struggles and self-doubt in Carrie's quest to become a writer -- I could relate to this all too well! Although quite painful in spots, Carrie doesn't give up on writing and of course, we know that's the right decision from what her future holds.

I felt much more compelled to keep reading in this second instalment of the prequels. Overall, I'd suggest reading The Carrie Diaries only so you fully understand Summer and the City. It's the questionable main course you must suffer through to earn your dessert. And what a dessert it is.

Have you read Summer and the City yet? Do you agree?