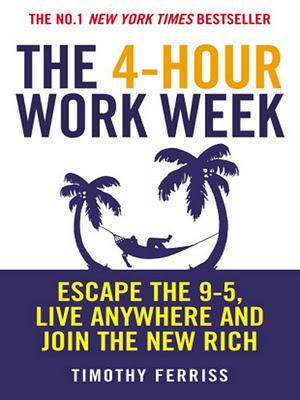 There was such a huge buzz surrounding this book, I just had to check it out...

I hate business books, as a general rule. To me, they always seem to be filled with vague mantras like "work smarter, not harder", without giving examples of how to actually put the concept into practice. Plus, their hard-sell language on the back cover always puts me right off.

I made an exception for Tim Ferriss's book because, frankly, who can resist the lure of working 4 hours a week? Plus, everyone seemed to be raving about it, so there must be something to it, right?

Damn straight, there is! He challenges what we've all been trained to believe from a young age: that to be a good citizen, we should work 40 hours per week in a boring job until we're 65 or so and then retire. By retirement age we're often too old to really enjoy ourselves. Instead, why not take mini-retirements throughout your life and work as little as possible? Sounds good to me.

Before you go thinking Tim is one lazy SOB, here's a quick run-down of his achievements:

Impressive, huh? Not only does he share how he's done all this, there's plenty of challenges, online resources, examples, worksheets and links to templates on his web site to help you emulate his success. If you even take away one of his tips in the book, you'd see your life improve, but even if you don't implement any of his suggestions, you'll definitely enjoy the plethora of cheeky anecdotes from Tim, his friends and previous readers.

The principles are certainly applicable to writers and freelancers -- how to "batch" your work tasks, not get distracted during the work day, and ease your way out of a 9-5 job and increasingly work from home. They have definitely helped me.

I borrowed this book from the library, read it, bought the expanded edition on Amazon and then reread it. This is one you'll want to return to again and again until you wear the words off the page.

Read it IMMEDIATELY. Thank me later.

Have you read The 4-hour Work Week? What did you think?