Proving former nerdburgers like me who did the MS Readathon can grow up to be rather cool actually, Gabrielle Tozer is a magazine features writer with a grab-bag of amazing titles to her name. She will soon be adding 'published author' to her credentials, with the launch of her upcoming book. She has graciously shared her writing tips and behind-the-scenes glimpses with us here. 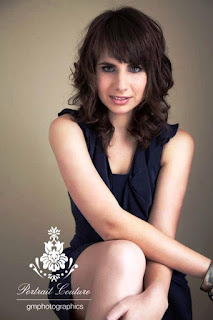 
When Gabrielle’s not churning features for her full-time magazine gig at Prevention Australia magazine, she’s working (‘tearing her hair out’) on the sequel.

Her writing has also been featured in titles including DOLLY, Cosmopolitan, Mother & Baby, GOfish, Weight Watchers magazine, The Canberra Times and mamamia.com.au.

Say hello at www.gabrielletozer.com, on Twitter @gabrielletozer and on Facebook – distractions are always welcome. In fact, they’re encouraged.

1. How did you discover you wanted to be a writer?

Even as a tot, I adored reading. I’d read everything I could get my paws on – and then re-read it, just for fun. You know those kids who’d happily do the MS Readathon forever if they could? That was me. I think that interest in devouring book after book naturally led me to writing my own short stories and, when I learned you could get paid to do that, I was hooked.

I was young, too: five years old and all buck-toothed and mono-browed, with limbs resembling a baby giraffe. But I knew what I loved and nothing could convince me otherwise. I even had an assignment in kindergarten where we had to name our ‘dream careers’ and – this makes me so happy – journalist and author were both on there. Okay, okay, in the interest of full disclosure, ‘lady who works at Grace Bros’ and ‘craft shop owner’ were also on the list, but luckily I followed the right path (because DIY is my sworn enemy).

Later on, my decision was cemented after meeting young-adult authors John Marsden and Margaret Clarke. My little cotton socks were knocked off and I knew, more than ever, I wanted to be a writer. My friends and I would make our own magazines using A4 notebooks, paper, textas and cuttings from real mags. I’d kindly nominate myself as the editor-in-chief – complete with my very own ‘editor’s letter’. Occasionally I feel embarrassed that I’ve known what I’ve wanted to do for – literally – 81.48 per cent of my lifetime. But, most of the time, I feel blessed, because it’s given me more years to do what I love most.

2. What were your first goals as a writer? For which publications did you aim to write?

When I first started, my only goal was to write. Simple. Once I was doing that regularly, I began to look for places to pitch my pieces to, whether that was magazines, anthologies and competitions (not to age myself too much, but this was before endless blogs exploded all over the internet).

Now, I’m no Carrie Bradshaw – I have terrible shoes, a limited wardrobe and a lack of interesting dating stories – so the high-end fashion titles were never on my radar. But everything else was: entertainment, news, music, lifestyle, youth, health, celebrity, reviews, creative… you name it, I’d give it a crack. I wasn’t picky – the local newsagent introduced me to a smorgasbord of magazine titles, and I contacted every editor possible. Eventually, someone took a chance on me and said yes, and it snowballed from there.

Knowing what I do now, I’m relieved I stayed open-minded with genre and didn’t pigeon-hole myself too much – writing on a range of topics keeps things interesting and means I’m always learning and discovering with the reader.

3. What was your first paid (or breakthrough) article? How did it come about?

My first paid article was for a Geelong-based street-press title called Forte in 2004. I’d been lucky enough to chat with Naughty by Nature for the Canberra-based title BMA, and Forte wanted to reprint it because they hadn’t secured an interview. I was thrilled to be commissioned and promptly signed up for an ABN to feel like a real freelancer.

4. What is the most enjoyable article you have written?

Tough question. Honest answer? I don’t know. Some of my proudest moments have been after I’ve wrangled groups of high-profile Australian celebrities together for photo shoots (not always an easy task!), interviewed them and written up their personal stories. It’s always a little stressful in the lead-up, but once it comes together on the day I feel a real sense of achievement. Seeing my byline in the finished product is fabulous, too.

(Actually, one particularly fun story was for Weight Watchers magazine in 2011, where I had to trial different exercise classes with my now-husband, Jason. I dragged him along to a salsa class and, while we weren’t exactly Fred and Ginger, we had a great time... treading on each other’s toes and laughing our heads off, that is.)

5. Tell us about your new website, www.gabrielletozer.com, and how it was created.

After recently getting hitched and changing my name personally and professionally to Gabrielle Tozer (my bylines used to be under ‘Gabrielle McMillan’ or ‘Gabby McMillan’), I decided to treat myself to a shiny, new website to go with my shiny, new surname.

I’d already worked with design company Magicdust on my previous two websites, so they were an obvious choice. My vision and ‘feel’ for the new site was clear in my mind – I just needed their help to bring it to life. I wanted something fun, quirky, feminine and strong; a place where I could upload recent work and keep people updated on my news, portfolio and upcoming books.

I considered adding a blog to the site but decided against it (for now, anyway) – there are only so many hours in the day, after all. I’m so happy with it and thankful to the gorgeous Simona from gm photographics for snapping some of the photos of me, too; talk about a team effort!

6. I'm counting down until February 2014 when your debut novel will be released! Can you give us a sneak peek into what it's about?

Ohhhh, now you’ve made me blush. And nervous. It sounds ridiculous but I always forget about the ‘people reading/judging/reviewing my novel’ part of becoming a published author! Seriously, all minor panic attacks aside, thank you. I still can’t believe it’s happening and probably won’t until I have a copy in my hands (and even then I’ll probably wonder if it’s all a dream). For the moment I’m sworn to secrecy regarding the characters and plot, but I can say it’s a young-adult novel that will hopefully make tweens, teens and young-at-heart adults smile, cringe, roll their eyes and laugh. Hopefully.

7. How did you pitch the novel to agents/publishers? How did your background in features writing help with that process?

At the recommendation of a mutual industry acquaintance, HarperCollins had dropped me a note to see if I had any spare manuscripts hidden in my bottom desk drawer (oh, I wish!). I didn’t, so I came up with four-five ideas, (two had already been lingering for a while), wrote them down and pitched them to the publisher via email.

I was flying by the seat of my snug-fitting pants and probably broke every ‘How to pitch your novel’ rule out there, but I somehow fooled them into thinking I could do this. HarperCollins told me the two ideas they liked most, I narrowed it down to one, then churned out four sample chapters so they could get a taste of my ‘voice’ (a very important ingredient, especially in first-person writing and young adult). Soon after, they requested a full manuscript, which I then wrote 'on spec' and handed in about nine months later. Two months later, I was offered a two-book contract (and may have broken down crying in my work hallway afterwards, reality television-style. It was very dramatic).

As for how my features writing experience helped? I suppose it reminded me to pinpoint to the publisher what I wanted to write and who I thought my novel would be suitable for, but overall I felt like a beginner all over again! I won’t lie: I often felt like a fraud who was following her gut instincts and hoping for the best – fake it ’til you make it, anyone?

8. What are your best tips for aspiring authors?

Write. Write every day. Too busy? Swap watching that re-run of Modern Family and make time to write – even if it’s just a paragraph or two. It sounds obvious, but your style will only improve with regular writing sessions.

Be gentle with yourself because your first draft won’t be perfect. In fact, if it’s anything like my first draft it will be terrible with a few moments of awesome. But don’t let that discourage you. My motto is – and will continue to be – write first, edit later. It’s impossible to edit a blank page, remember?

Also, there’s not one magical way to write a novel, so experiment to find your groove and ideal writing process. Some people like to plot, some people like to ‘pants’ (write by the seat of their pants/make it up as they go): I’m somewhere in between, and that’s okay. For me, writing in the morning before work and on weekends suits my lifestyle; others may prefer wrangling words by moonlight.

Oh, and last but not least: write what you love! Forget trying to re-create the style or genre of the latest trends; just be yourself and you’ll shine.